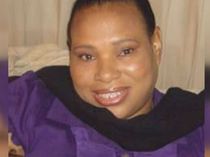 Montgomery County Police said 49-year-old Vanessa Dixon was waiting for a bus in the 1000 block of Cresthaven Drive when she was hit by an SUV; she died a short time later from her injuries.

The man driving the SUV is 22-year-old David Alejandro Rodriguez, whom police said remained at the accident scene. He was taken into custody on suspicion of DUI.

Dixon's family put up a makeshift memorial at the site where her body landed. They are heartbroken.

"Vanessa is a loving person," said her sister, Alvona Chaplin. "She would cook, feed everybody who was hungry."

"I will never, ever forget this day ... she came to the hospital where I worked and I didn't even know," said sister Velma Hibbert.

The victim's family says Dixon was a certified nursing assistant and was in the White Oak neighborhood interviewing for a job--taking care of an elderly person.

"There's no way ... a very nice, loving sister should lose her life like this," said Dixon's brother, Gilbert Chaplin.

Dixon's family has set up a Go Fund Me account in her honor.